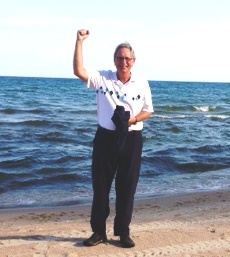 We have greeted every “Happy New Year” with abundant enthusiasm from anyone offering even a robotic snippet of good cheer in the past few weeks. How do you top the Foleys’ 2013!

Last year at this time, the Foleys wished you a year of miracles.  Little did we know that we would be the recipients of several

The week of Feb. 5, 2013, two things happened: I started a fascinating, rigorous and meaningful job as vice president of corporate communications at WPS, our state’s largest nonprofit health insurance provider and a player in the challenging health care Exchange. Days later, Tom, at a routine cancer check at Carbone Cancer Center, was unexpectedly declared cancer-free six months earlier than scheduled

I had imagined this moment since January, 2008 when doctors ushered our two daughters, my husband Tom, and me into a classroom/lab, plunked us in front of a flat screen, and clinically displayed a scan of his head that showed three ominous tumors eating away at his brain.

As we moved through doubts and near-death episodes during the next five years of punishing chemo and death-defying infections, I daydreamed of the huge cancer-free celebration with dancing, speeches, marching bands, and corks popping at a hall — or maybe a barn!! — decorated in gold and silver. I could see the day we would celebrate our good luck at being back to normal.

Instead, when got the news Feb. 11, we were without words. We woke up the next morning and it felt like the previous day. No fireworks. No transformation. No barns.  We quietly embraced a huge sense of relief that death was not imminent. And we waited for normal to return. The 2008 version never did.

As 2013 progressed, several people who loomed large in our lives retired and moved away. Our daughters both landed jobs . The Great Recession abated.

What did you say?

In August, Tom suddenly lost the hearing in one ear. The diagnosis shook us as deeply as that miserable day in February, 2008 when the doctor said Tom would likely die. It reminded us that while cancer had been beaten back, its cruel legacy would likely leave Tom disabled by head pain and neuropathy. Loss of hearing and ringing ears seemed like salt in the wound. We said goodbye to the energy of crowded noisy restaurants and concerts at Overture Hall, which made the ringing unbearable.

This most recent Monty-Python-esque disease made me realize that I wanted cancer reparations. I wanted all of us to immediately get younger, taller, thinner, stronger, smarter and happier (and our teeth to get whiter) because we had defeated the Angel of Death. Instead, we got the rest of our life.

“You want to go the dairy?” Tom said incredulously.

“No, I said should listen to Gary (Graffman the pianist),” I mouthed  moving my lips as if they were rubber bands.

We are now in the market for a hearing aid. I need to check my health insurance, I told him.

“You’re looking for elf on the shelf?!!” Tom asked.

I guess this is the way it’s going to go.

We got a hold of ourselves and refocused on gratitude for small things. We bought Tom a king-size bed. At  6 feet 4, Tom began sleeping in the fetal position on a single bed in a tiny bedroom, similar to a nursery, when he first came home from the hospital in February, 2008 because he needed to sleep without distraction in very short spurts. We still wonder why we did this for five years. Tom protested the purchase, saying he felt safe in the tiny room on the tiny bed. And he didn’t want to spend any more money on him. I dragged him to Sears after researching the best bed values and demonstrating the good prices at his favorite store.

The monster bed now fills the master bedroom. He conducts business from his new safe harbor, paying bills, soaking in the news of the day on the TV set, and monitoring the world of sports. He has become quite imperial in the past months, calling me in for audiences about major news events, such as this week’s train explosion near Fargo, N.D., where friends live. He has a lot of proclamations about current events delivered from his new perch with the TV blaring. Thank God for soundproof, plaster walls.

“I love this bed,” he says at least once a week.

If a bed can make this man happy, there’s got to be happier days coming in 2014. I am even considering negotiating a peace treaty without reparations with our enemy, brain cancer.

We will look  for laughter in 2014. We know hard-fought lessons will come day-by-day. Laughter makes them survivable. We will find this good fortune during the endless routine of washing the dishes (especially the pans) and the seeming despair of staying late at work yet another night to finish a report. Dish-by-dish, page-by-page, bed-by-bed, we will all find happiness that comes with recognizing that being alive every minute in 2014 is the true New Year blessing.

Happy New Day, New Year and for those of us most fortunate, Happy New Bed! May your 2014 be as blessed as the Foleys’  2013. May we all enjoy every minute.