Get some rest, David 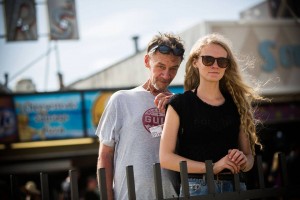 I love this photo of David and his youngest daughter from his Facebook page.

Tom and I can’t stop talking and thinking about David Carr’s death. The only thing I can tell those of us who knew him or admired him and will miss him is that he really had a ball once he got sober. He died exactly where he likely wanted to go — in the newsroom.

He was so in love with Jilly and his girls. And like most of us who love journalism done right, he was a true maniac about working and drinking coffee late into the night. His voice got gravelly after he worked a story at ground zero at 9/11, and I can’t stop thinking that his unthinking risk of exposure to get a good story may have had some link to the lung cancer. But what do I know?

When he came to Madison, we had breakfast. I remembered him as this pudgy Irish-looking bad boy in Minneapolis who had an unfortunate pr disaster about insulting women at the alternative weekly. The guy sitting across the table from me at the Hilton looked nothing like that. During those days, he talked a bit about his ‘swan neck’, the residual of awful radiation for lymphoma more than 20 years ago. This was one reason I was absolutely sure that Tom should not have radiation and we went to NYC to get the special recipe for the stem cell transplant for lymphoma folks. Tom’s disability from the chemo had taken hold about the time David was in and out of Madison, and while we were both sad about all this, we didn’t focus on it and we were both indeed feeling lucky to be alive.

He told a story of how he was spending time in a Hyperbaric chamber in NYC in an experiment and meeting luminary lymphoma survivors also looking for a cure — any cure — for relapsing lymphoma. He gave me the phone number of one of them who was a doctor and we got great advice about going to New York when Tom was very sick. In a way, David help save Tom’s life.

Tom and I suspected when we saw the recent TV footage that cancer was back. I am unable to stop thinking that he beat all the odds with sobriety struggles, family tragedies and superstardom at the Times, and the undiscriminating and unbeatable cancer took him from us. OK, cancer researchers, let’s get busy and find a cure.

One more thing. I couldn’t read “The Night of the Gun” and it sat on my night stand for years. I just didn’t want to know the dark side of a guy who was so kind to me when I was down and out. I would share the email he sent when I left the State Journal but I’m not sure he’d like that. In fact, I can’t believe now what was in his heart in 2010. I still thought of him as that guy with the Hat Cam covering the Oscars and using that to get into the Times’ DNA.

In 2003, he sat in our family room and I told him he should write a book to pay for the girls’ education. I just didn’t think he’d write THAT book. You can see if you read back story on the history that David’s talking points changed or his publisher changed them for him. He started by saying the book was to pay for the college educations. He was very concerned about money at that time. And then the talking points were about telling the story about himself that he had forgotten and needed reporting so he could face the truth. It made me laugh Saturday that he was not only a great journalist but a great pr guy, as they call me today.

I very recently packed up a box of books for Goodwill and hesitatingly put the unread “Night of the Gun” in the box, as if burying the old David. I saw today that the book is out of print and climbing up the best seller list. Tom now is insisting that he needs to read it and he is right. I was so worried Saturday about Jill and their retirement fund now that he has passed. Even in death he is supporting her with book revenues that will help her with this unfathomable transition. Good job, David.

I hope whatever part of him is still floating around knows that someone like me from the straight arrow club is so very proud of the bad news dude turned good guy. Get some rest, David.