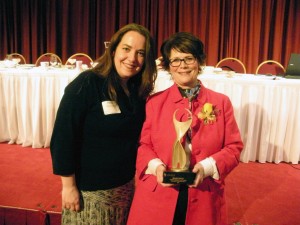 A stunned Ellen Foley thanks Rachel Rasmussen of the Business Forum for her nomination.

Ellen Foley, role model for many and an advocate for women to become great leaders, was honored Tuesday night with the ATHENA Award from The Business Forum in Madison before a crowd of more than 200 people at the Monona Terrace Convention Center.

As Senior Vice President of Corporate Communications at WPS, Ellen has had a career rooted in journalism, strategic communications, marketing, and community involvement. But her role as friend and mentor is what really gives her the most reward.

Ellen and the other nine nominees were honored for demonstrating excellence and initiative in their careers, community involvement, and support of women. The international awards program seeks to inspire others to achieve excellence in their professional and personal lives.

The Business Forum has helped its more than 80 members build their careers through networking and service for 27 years. It has presented the ATHENA Award for 18 of those years. Previous recipients include longtime community leader Carol Toussaint as well as Laurie Benson, founder of Inacom Information Systems, now called Core BTS.

The award didn’t surprise Mike Hamerlik, president and CEO of the WPS Companies. “Ellen has built a great team here at WPS with the very characteristics the ATHENA Award represents: mentoring and making meaningful connections.”

Ellen was nominated by Rachel Rasmussen, president of Rescue Desk, who has benefited from Ellen’s mentorship over the years.

Ellen has mentored and counseled countless women throughout her career,” Rachel said, “helping them make strategic choices and changes to better their lives, and to always, always, be true to themselves.”

In her acceptance remarks, Ellen said she was humbled and honored to be in the same room as the other nominees, all of whom she said are winners. And then she spoke of the mentoring role that is so important to her.

“Tonight I am not the editor of the State Journal, or an executive at one of the city’s largest employers, or a civic leader,” she said. Tonight I am just Ellen, friend of Rachel. And that is truly awesome.”

In her nomination, Rachel summarized Ellen’s professional career but accented Ellen’s ability to make so many people feel important and respected.

“One look at Ellen Foley’s resume, and it’s undeniable that her career has centered around leadership, creativity, and initiative,” Rachel wrote. “Her success is rooted in both her natural brilliance as well as her infectious energy, and she approaches all of her professional endeavors with intelligence, grace, humor, and unwavering determination.

“With a career that began in the male-dominated field of journalism, Ellen rose through the ranks of newsrooms around the Midwest, starting as a reporter and copy editor in the early ’80s in Minneapolis, then moving up the corporate ladder with editor positions in Kansas City, Philadelphia, and, finally, as editor-in-chief of the Wisconsin State Journal, where not only was she the first female editor at the State Journal in 152 years, but under her leadership, the editorial page was a Pulitzer Prize finalist.”

Rachel noted that Ellen led the campaign for the successful $134 million referendum at Madison Area Technical College and started her own business as a communications consultant.

“In the late 1980s, Ellen co-founded a non-profit, Violence Against Women Coalition, after her sister was violently murdered by a sexual predator. Ellen was 35 years old at the time, and took her toddler daughter by the hand and her baby daughter in a bamboo basket and spoke all over Minnesota – including on the steps of the Capitol. The coalition helped change the laws in Minnesota.”

In addition to WPS colleagues and other friends, Ellen was joined at the award dinner by her husband, Tom, who is a cancer survivor. Ellen shared that journey on a blog that had 138,000 visitors.